What are Tests Good for?

Tests, whether standardized or not, remain increasingly popular and in spite of lip service arguing differently, in many instances, they continue to be the main form of assessment in the majority of educational settings.  Many school systems use tests as the ultimate tool for assessing students’ achievement. In some contexts written tests are also used to evaluate teachers’ work and in some extreme cases, determine a person’s suitability to be a teacher. ​ Tests provide control. Not surprisingly, the etymological origin of the word “test” reveals an underlying need to examine the correctness, ascertain the quality and prove the worthiness of those tested. However, it is common knowledge that tests are the scarecrows for teachers, students and the system. They are an inexhaustible source of stress.

When tests that are said to be valid and reliable are seen as providing a seemingly secure verification of the knowledge that has been mastered, we assume that they are fair. We like to believe that rather than discriminating, tests discern the worthy from those less so. Yet this cannot be further from the truth. Tests do not provide equal conditions simply because children, or for that matter teachers, are not equal in the sense that we could understand 1+1 to be equal to 2. All tests will favour some people against others. Many articles have been written to argue that tests do not provide equal conditions to all because learners acquire and express their knowledge in different ways and at a different pace. For example, if we take into account Gardener’s theory of multiple intelligences, pen and paper tests will not favour learners who have developed interpersonal and emotional intelligence more than verbal-linguistic or logical-mathematical intelligence. So, claiming that tests provide equal conditions and can be stress free is essentially meaningless.

What do tests teach us? We do and like quizzes and crosswords and those activities are absolutely harmless and we feel we learn a lot from them. Unfortunately, this is not the case with tests. A test is a very powerful teaching tool and it is very successful in developing attitudes but does it teach the right things and develop the desired attitudes? As argued above, tests teach us that an important purpose of education is to teach us to do well on tests. However, it’s easy to imagine a person who can list all the important human rights in a test and the reasons why they should be protected, and who later joins a fascist organization. There is a phrase used in the US for knowledge checked on tests: paper cup knowledge, meaning you use it, as you use a paper cup for coffee, and when your test is done or coffee is gone, you can throw it out.

Tests also degrade or question the rightfulness of what many teachers do in the classroom on a daily basis. In many education systems, teachers and students are engaging in different activities throughout the school year –  projects, games, workshops, and then, at the end of the month or year they are supposed to stop these “light” activities and games and do the serious thing – take the test. Of course, teachers can think of their teaching as exam preparation. In this case they accept that tests are the main goal, aim or objective of teaching. A history teacher on a course for critical thinking told me once that he stopped trying to motivate students for critical and creative thinking because he found that developing these competences is counterproductive for his students’ achievements on final tests. This seems to suggest that we might use 21st century teaching methods but should tell our students not to understand and think critically of the material but only memorize it for the test.

If students are persistent enough, they will become experts at taking tests. They can memorize rules, learn to count toothpicks or recall long lists of words but it is difficult to see any significant point in such actions. Of course, there are situations in our careers when we are obliged to fill in tests – and they are usually as meaningful as they were when we were students. Here is an example: in Serbia all teachers are obliged to be ready for firefighting. How are they prepared for it? They listen to a lecture and then they have to take a written exam. All teachers pass but no one would say that they are ready to act as firefighters in an emergency. You can rehearse taking a test to such an extent that the whole exercise becomes pointless and devoid of meaning.

Furthermore, most tests teach us to limit ourselves to our cognitive being and to marginalize will, creativity, attitudes and emotions. When a little girl at pre-school was asked which mark in art education she is happy with, she answered “F” (the lowest possible mark). Parents were surprised and asked why and the little girl explained: children who want an “A” (the best mark) draw what they are told to draw whereas children who get a bad mark can draw anything they like. This girl preferred freedom of choice to having a good mark. Doesn’t this story also suggest that tests teach us blind obedience and careful avoidance of creativity? 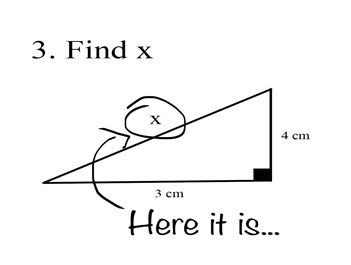 here is another example of a task which has been widely shared on social media, and which illustrates the same point . Find X! What mark would you give to this student? He or she certainly deserves the best mark if we value creativity, an original approach, critical thinking, and a sense of humour. Unfortunately, assessment rarely appreciates these assets. Tests are often based on the assumption that a problem has only one or a finite set of solutions. In real life, this is rarely the case – there are many unpredictable possibilities.

Imagine this question in a test! Is it reasonable for a person who doesn’t have all fingers to choose a career as a guitar player?  What would the acceptable answer to such a question be? How do you think Django Reinhardt and Tony Iommi would answer such a question?

Finally, tests favour and reinforce authoritarian personalities who refuse to change and develop. Some mystical authority has created a set of questions, answers, standards and criteria – you can obey or fail. Test designers often talk about freedom and critical thinking and similarly attractive 21st century expectations, but critical dialogue with a test is impossible. Let us recall the prince from Kant’s famous article What is Enlightenment? He says: “Argue as much as you will, and about what you will, but obey!”

If we keep in mind (and many teachers do) all of the above, there is still a question: what is the secret of the unbearable lightness of using tests?  Probably that they are easy, safe and cheap. Again we return to Kant’s wisdom when he says laziness and cowardice are the causes of our hesitation to get out of our “self-incurred immaturity.” This is like when you watch different commercials on television and see products that solve all your problems quickly, easily, without any risks and at a low cost. So, let’s just give a test!

We invite you to join L2C!

By becoming a member you will benefit in many ways: